Home  »  Tech   »   Microsoft The Big Picture Experience – I Wasn’t Thrilled, But It Was Still Good

On Wednesday 23rd November, I attended Microsoft’s The Big Picture Experience, and to honestly say, I expected more from the event. For those who are not aware of the expo, it was essentially to showcase Microsoft’s latest and greatest technology in action that was targeted towards the home, improving business productivity, customer experience, and data analytics.

This was my first time to a tech-related expo so I didn’t really know what to expect, and being Microsoft, I expected a whole lot more than what it actually was. I spent the entire day there and I thought the place would be packed with so many people that you wouldn’t be able to get your hands on anything, but I was incredibly surprised that I could walk around without bumping into anyone.

The customer to staff ratio felt like 3 customers to one staff member. Although they were very helpful, full of information and friendly, I was only approached by one person to give a demonstration of their stand. Just because I’m not wearing a suit and tie, and I don’t look like a business man, it doesn’t mean you can ignore me. The only way I was given a demonstration was to listen in on someone else’s.

It Was Only A Sales Pitch That I Didn’t Buy

The main tools that were predominantly promoted at the expo was SharePoint 2010, Microsoft Dynamics CRM 2011 with Web Apps/Office 365 and Lync. Since I just finished a project working on SharePoint and Dynamics CRM, I’ve had a lot of hands on, technical experience with the tools. I sat down with one of the staff members to give me a demonstration, just to see Microsoft’s perspective of SharePoint. She gave me a run through of how easy it is to use in an organisation, the benefits it has, and how easy it is to edit documents online. When I got to the demonstration of Office 365, she said a number of times that when editing documents online, and in Microsoft Word 2011, the formatting stays the same. However, every time I have used the consumer version of Office 365, Web Apps (Office.com) with SkyDrive, I’ve never been able to have the formatting while editing online and offline the exact same.

Here is a screenshot of my Maths assignment I did in high school displayed in Microsoft Word 2007. 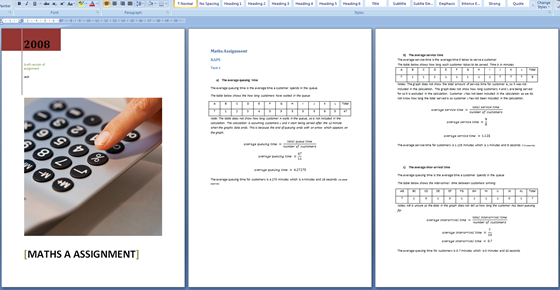 Here is how it appears in Office Web Apps on Sky Drive after a normal file upload.

Ah yes, I can see editing documents online keep the exact same formatting. The response to this I got was “I’m not sure why this happens”.

My next question to her was about my experience with Data Loss using Office Web Apps. In a nutshell, I lost an entire PowerPoint Presentation using Office Web Apps. Her response, “I’m not sure about that either, why don’t I get my colleague to help you out. Oh there he is, getting a coffee. You can talk to him about your problems as he works on the consumer side of things”. Nevertheless, he wanted his coffee, did a wave and never came to us. Unless he was ordering a coffee for another prospective attendee, I actually found that quite rude of him not to come over.

I also asked another technical question about SharePoint, and yet, the response I got was “I don’t have the knowledge to answer that”. Most of the staff there seemed to be sales people. Then again, the whole event just seemed to be one Sales pitch demonstrating the latest Microsoft products, but not actually selling anything or signing anyone up to the service.

To make good use of my time for the day, I made a list of all the speeches I wanted to listen too. Some speeches were done multiple times throughout the day to ensure you got to listen to them all when there was another speech you also wanted to listen to at the same time. However, some presentations had a completely different name, yet the presentation was exactly the same. So one speech, with completely different names, I listened to three times, yet each presentation was delivered differently by the same speaker. 9am Is Different Compared To 4pm

At 4pm, when the last Vision speech was concluded, the bulk of people had left, yet I still wanted to listen to the remaining two speeches that I missed throughout the day. These last two speeches only had about 3 people listening to them. At this stage there was probably more staff than people.

But before they started, there were a couple of demonstrations that I missed, so I went over to them to find out more. However, there were three staff watching Foxtel on the couch in one display, and three more staff at the other display talking about a show that was currently on The Discovery Channel. I walked up to them, and not one single person acknowledged I was there. Although they’ve probably been there since 8am, and they are tired, it would have been nice if they’d say at least “hi”, but they seemed far more interested in talking to each other about the show they were watching, rather than to give a demonstration. To make matters worse, watching Foxtel wasn’t even part of their demonstration.

Although my experience at the expo wasn’t that flattering, there were a few interesting displays. One aspect of the expo that I really enjoyed was the social analytical tracking tools and capabilities within Microsoft Dynamics CRM 2011. In the CRM Marketplace, there is a free tool called Parrot, which for large organisations, I can see being extremely useful. It essentially crawls Social Media sites such as Twitter, Facebook and LinkedIn picking up negative, neutral, and positive tweets and posts about your company, brand and image. This is great for organisations as they can get  a real insight into what people are saying about their organisation. For those people who have a negative experience with a particular company, using Parrot, the organisation can become aware of their message, ask them why they feel that way, and help them –  turning their negative experience into a positive one, or even simply to ask them for feedback to help improve the organisation’s brand. If you read my article about when I lost data with Microsoft Web Apps, a couple of hours later, Microsoft contacted me asking if I can reproduce the data loss, and created a case of the bug. Without a tool to read my negative tweet, Microsoft would have no idea that this bug existed, which down the track could cost them thousands. Not only this, but since it’s inbuilt into CRM, you can create a case about the issue, save their contact information, and even find connections that person has to other people within the organisation. It was quite an incredible tool for an organisation to have and use.

If your organisation is small, and using CRM is a huge step, Microsoft has released a free download of Analytics for Twitter, which was also demonstrated at the event. It is pretty much an Excel Spreadsheet connected to the Twitter API which scans the tweets, shows pretty graphs and analyses what people are saying about a company. Although you need to have Microsoft Excel 2010, PowerPivot for Excel which is also a free download. Although it was on demo, when I typed a hash tag in to try it out, the application crashed – then again, when it works, it will be better than nothing.

Also on demo was FaceCake which is basically a virtual dressing room where you can stand in front of Kinect and try on different clothing, and view what you look like wearing it, and what it looks like in different environments. Although I only see it as a novelty right now, I can see that the technology is only the start of something big. However, I did find it hard to use, and so did other people when trying to scroll through clothing items. When I tried it, the clothing didn’t seem to cover my complete body, so it didn’t have the same visual appeal. But this could probably because of the environment it was set up in. Nevertheless, it is a great piece of technology, and it would be great to see where developers of Kinect take things. Quotes and Notes of the Day

Although it wasn’t a product launch, throughout the day, I did collect some interesting quotes, stats, statements and notes.

Microsoft made use of Tagly (instead of using Showbags). This allowed people to snap QR Codes on topics they would like to find more about after the event. So here’s everything you need to know that was on display at Microsoft’s The Big Picture Experience. The Future of Productivity A World of Devices

Microsoft The Big Picture Experience will be on again in Sydney on 1st December 2011. You can follow the hashtag #bigpicau and Microsoft Australia on Twitter.

For reviews from attendees at this event, please see the following articles: