I’m currently working in a small team, and Google Docs has been pretty good, but we’ve always run into problems when creating presentations, so we decided to give Microsoft Office Apps ago.

So just over one week ago, I gave it a shot. I shared the folder in SkyDrive so the team can all work on it at once. Evan this was difficult because in SkyDrive, there is a section “Folders Shared With Me” which you have to enter separately, which is a bit different to something like DropBox. Nevertheless, for now, it was only me who was editing the presentation.

Then, a few days ago, I went to open the presentation, only to find everything I’ve have done was gone, so I tweeted my hatred about using Microsoft Office Apps. A day later, a Microsoft Office Web Apps employee responded to me about it and asked me to provide more details, so I wrote this reply back to him.

I was using Google Chrome version 13.0.782.112, and I was talking to my friend about the humour of the save button which it says “There is no save button, it saves automatically”. It’s a shared document with 3 other people (no one touched it since now and when I created it), and it was originally an uploaded document which I modified to be able to write my slides on, and I wrote a few slides with text on them. When I came back to it a week later, the slides where there, but the text I have written was gone.

The entire usability experience of it is pretty poor. You make a change, and then it takes 2 -5 seconds to save what you write. It needs to do this in the background (take notes how Google Docs does this). Because it is annoying waiting, especially on a slowish connection. In IT myself, I just got frustrated at using it, I’m always waiting, it wasn’t a smooth process at all.

Also, I don’t like using the Word Web App as well because you can only edit on a large canvas and not edit on the “preview” layout where everything is nicely formatted. For example, uploading a document, viewing it is all nice and pretty, but when you go to edit, all the formatting is lost, and then it re-appears when you preview it, but you can’t make everything fit nicely while your editing.

I got a reply the next morning of this: “Thanks for the details. I’ve opened a bug for the PowerPoint Web App issue. Do you have a deterministic repro?” The first thing I had to do was Google what “deterministic repro” meant because I’ve never heard of that term before. Unfortunately, Google wasn’t that helpful and only gave me 71 results. Bing was even worse and gave me 9. If you’re not sure what it means, it means can you reproduce the event with no randomness, thanks to some Facebook fans.

So thinking back to what I did, I was able to reproduce the event. Here’s what I just did. 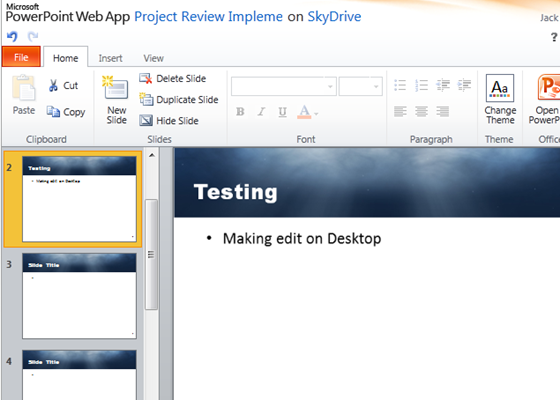 So, with those steps, what I wrote on my Laptop was erased, and this is what happened with me last week and why I lost all my work.

Although this is a small issue, it makes it a vulnerability in the way the application works. I have read somewhere that it’s meant to block access to other people editing the same block of text that you are, but obviously, this did not work in my situation.

Even with a little bug like this, it turns me off using Microsoft Office Web Apps in the future, and it is quite a big risk to take, especially for important documents. I used to fear Google Docs because of this same issue, but now with the live typing and revision history, I can trust it much more now. As for Office Web Apps, my future use of it will be very low.

Let me know Microsoft when you improve the PowerPoint for Microsoft Office Web Apps.

I do have to ask readers, what have your experience been like using Microsoft Office Web Apps? Have you also been able to replicate data loss like I have?

Update 02/09/2011: I asked the Microsoft Employee for an update on the bug request, but couldn’t provide me with further information about it.