I have waited for the NBN network for 10 years, and finally on Christmas morning, I received an email notification from iiNet (my current Naked DSL provider) saying FTTC NBN is finally available at my premises.

Where I live, FTTP has been available for 2 year for about half the town – the area closest to the Exchange. The area’s that are 4km+ away from the exchange, have waited a long time, and some streets still have another year to wait. That means, I’ve been suffering on a slow Naked DSL with a max connection speed of 6Mbps.

I always wanted a 100/40 NBN connection, and in the early days, MyRepublic seemed to have the best offering with unlimited data at $59.95 – the same price I was being charged with iiNet. However, that plan no longer exists, with all users on this deal being shafted one year later, cutting the speed or upping the cost by more than $10 per month.

Now that I can actually start looking for plans, I started looking for plans. 100/40 NBN plans actually increased in the last year, so I was seriously considering a 50/20 plan, but I thought, I’d rather spend the extra $25 and know I am getting the best internet the NBN has to offer.

What to look for when connecting to the NBN

One of the key metrics that you need to look for when choosing an NBN provider is the “typical evening speed”. As you share the internet with users in your area, this is an important metric. There was huge industry crackdown as users were paying for 100/40, but due to ISP’s not purchasing enough CVC (lanes on the highway), internet was grinding to a halt, to the point it was unusable and much slower than previous ADSL2 speeds.

In my hunt, I couldn’t find any provider that beat Aussie Broadband’s Typical Evening Speed of 90Mbps. Here are what other ISP’s are offering:

As you can see, Aussie Broadband thrashed the other big telco’s. If you can find an ISP that beats 90Mbps, please let me know in the comments!

So how did I hear about Aussie Broadband in the first place? Being a volunteer firefighter, I was looking for a company that would provide our brigade with an affordable internet connection that 1) allows members to study at the fire station to ensure a prompt turn out to calls, 2) general brigade activities, 3) enabling our turnout system to work to support us with directions and who’s actually responding.

Other country bridges actually recommended Aussie Broadband as they provide their internet connection for free or at a discounted price through their community sponsorship program.

Upon reading more about Aussie Broadband, they started off as a regional ISP, creating jobs in regional Australia city centres. All their staff are located in Australia, and they also employee volunteer firefighters as well.

From a technical perspective, another thing that sold me was Aussie Broadband’s CVC graphs, so you could actually see if usage in your area is being congested. I was not able to find any other ISP’s that provided this information to customers – probably because they have something to hide!

Aussie Broadband also manage their own backhaul network, so they deal directly with NBN. Most other ISP’s you see on WhistleOut are resellers of other NBN carriers. This means, if you have a problem, your ISP has to raise it with their provider for them to raise it with NBN, increasing the time it takes to solve your issue.

So I settled with Aussie Broadband and chose the 100/40 plan with 500GB data for $85/month with a 1 month free coupon. Checking back on my previous usage, I was only using around 60Gb a month. If I find myself running out of data, I will just increase my plan, which is like a couple of dollars per 100GB. 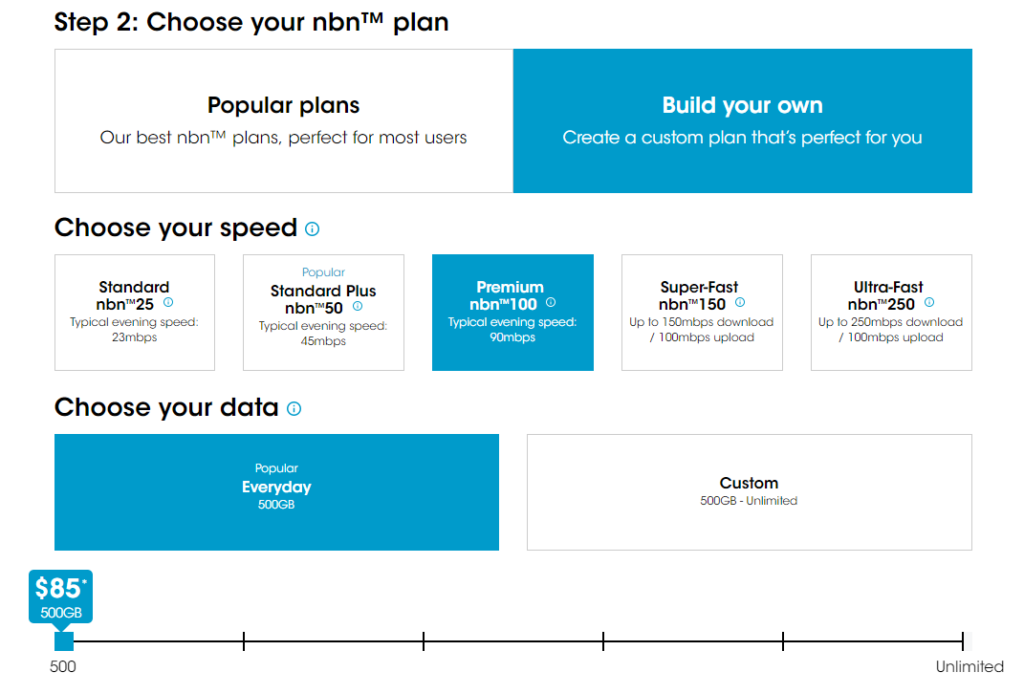 I asked a few tech questions on the live chat, which they were a great help. They were personal and didn’t follow a script like Telstra customer service agents do.

I signed up Monday night, received my NBN FTTC connection device on Wednesday, plugged it in Thursday night and within 5 minutes, I was successfully connected to the NBN network.

However, some email communications where a bit confusing.

I also got a SMS saying my phone has been ported, but it is still working with iiNet, so I called the technical support to get an updated of what’s going on. The support rep actually told me that it is a confusing message and is working on getting it changed as he had about 10 other callers with the same question.

I ended up calling twice, because I forgot a question I needed to ask. I luckily got the same person, who was amazing. Not only did he solve my question, he also explained technical things to me.

I was unaware that plugging in the FTTC NBN device actually activated the NBN connection. I was under the assumption that a technician had to physically do a cut over. He explained to me why.

So essentially, when NBN is setup and available to connect on your street, your line is already connected to the NBN. As you as you plug in the FTTC  device, it sends an electronic message, which then sends a message to Telstra and your old ISP to terminate your old phoneline. So it’s all automatic – unlike FTTN which is a manual cut-over.

So I actually learned from their tech support, that it’s technically possible with FTTC to have NBN and your old copper service running concurrently – it’s just that the NBN and the government have put in a policy to send this command to the exchange which automatically terminates your old copper line.

I’m still waiting for my phone to port over – it still works with iiNet, but the internet is working, with the only downtime being the time it too me to reconfigure (just one click) and connect my iiNet Budii Modem to the FTTC NBN device.

I must have been a lucky one! Less than 4 days and I’ve moved to the NBN with 5 minutes of downtime. Unlike my uncle who spent 4 months without any internet or phone with Optus.

I would just like to thank Aussie Broadband for the simplicity of moving to the NBN. Your one of the most affordable, value for money, excellent quality internet service provider that provides outstanding support. You are the iiNet of a decade ago, before they were gobbled up by internet cheapskate TPG. Please don’t sell out to them!