Over the past week and a half, I was lucky to be able to test out Vodafone’s new 4G mobile network. This was the first time I was able to experience 4G technology and to use the Vodafone network.

Personally, I haven’t been a fan of Vodafone as where I previously lived for 10 years; reception was non-existent, not even outside. The closed Vodafone tower was over 6km line of site away, whereas the Telstra and Optus towers was merely 300 metres away, which I could directly see from our balcony.

Since being connected to Vodafone, I diverted my existing Virgin Mobile calls to Vodafone, and used AutoSMS (Autoresponder) to forward any incoming SMS messages so I didn’t have to carry two phones around.

Unfortunately, where I live, I didn’t get 4G reception, which was a bummer, otherwise I would have tethered my computer and gone upload crazy, but the next suburb did (40km out of the CBD). I managed to get incredible speed, both down and up. 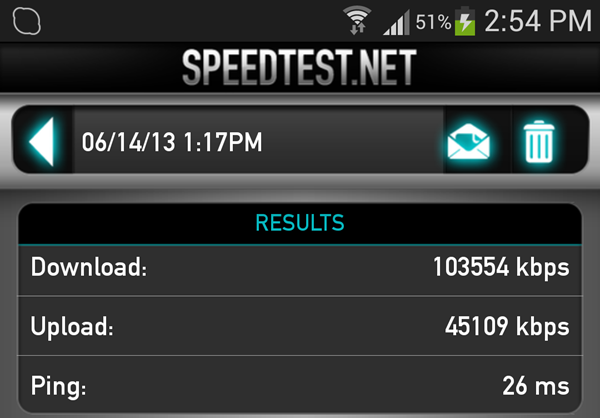 The speeds that is shown above is really the best-case scenario, because:

You can check out all my speed test results with the Vodafone network here on my Vodafone Speedtest Spreadsheet.

While I was testing the network, my dog was swimming in the water. I took a video of him swimming on my Samsung Galaxy S4, which made the video around 500Mb in size. I uploaded it through the 4G network, and it only took a couple of minutes, if that.

I attempted to upload the same video at home, and within a few minutes, the progress bar did not move. This just shows you the power of Vodafone’s 4G Network.

I am yet to use Telstra’s or Virgin Mobile’s 4G yet, but with the speeds I got in my tests, Telstra and Optus are unable to beat that today. 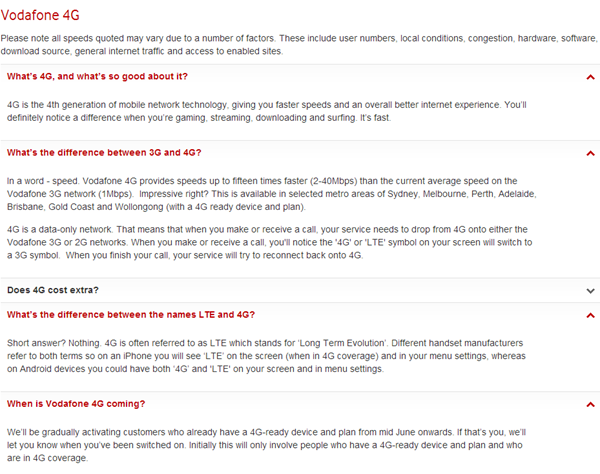 Although, having a fast 4G network in selected areas is only part of the story, when you are not in the 4G area, reception wasn’t consistent. In some areas of my suburb, I didn’t get any signal, something I never noticed with using Virgin Mobile. Speeds of Vodafone 3G and 3G+ network are pretty decent, with the majority of tests above 6Mbps for download, and 2Mbps for uploads, whereas Virgin will be below that. But then there were times, where Vodafone would struggle to get the speeds and performance Virgin Mobile would get.

In all honesty, I love the speed you get with Vodafone for both the 3G and 4G network, but for my mobile broadband usage I don’t need the speed as it is mainly just browsing Facebook, Gmail, and the odd tethering once a month. Virgin Mobile meets my need quite well, with better coverage than Vodafone. If I had a mobile phone data limit of 10Gbs, I would defiantly and relied on it more to do my Job, I would probably pick Vodafone. My thoughts though my change in a years’ time, as Vodafone is expanding its coverage in regional area’s and updating base stations, which will mean better coverage.

Vodafone sent me a Samsung Galaxy S4 along with a Sim Card to test out their new 4G network. As Virgin Mobile already provided my with the Galaxy S4, I used that. This means, I will have the Vodafone Samsung Galaxy S4 to give away to you! Like Jack Cola on Facebook to find out how you can win.

Nevertheless, don’t worry; readers of JackCola.org will soon have a chance to win the Samsung Galaxy S4 Vodafone sent me. Vodafone wanted it back, but I managed to persuade them to let me give it away to my readers. It’s unopened as I received the Galaxy S4 from Virgin Mobile as part of their handset tester team.