Like many countries around the world, Australian consumers are showing an increasing demand for coupons and vouchers. The internet allows us to access more deals than ever before, and has changed the way many of us make purchases. Online shoppers are more likely than ever to seek a cut-price product and save themselves money. Sydney is one of the top four cities in the world for coupon use, and around 72% of Australian citizens use discount codes at least once every month.

A brief history of coupons

Since the first coupon was issued back in 1887, the market for sales discounts and promotions has grown to epic proportions. That first coupon, a printed token for a free glass of Coca-Cola, was issued to promote a brand new drink on the market. The promotion was a huge success, and no doubt contributed to the future of one of the world’s most successful brands. Since then, thousands of companies worldwide have used promotional offers in voucher form to entice their customers.

Demand for promo codes has increased so much; an entire industry has been created to serve it. In 1957, the first company was created that dealt exclusively in vouchers. Today, technology has improved the availability of discount codes and made it easier than ever to find great deals. From apps that hunt the web for offers to voucher sites like OZCodes.com.au that collate coupons on one search platform, many new companies have sprung up to support voucher codes collectors in their quest for the best deals. 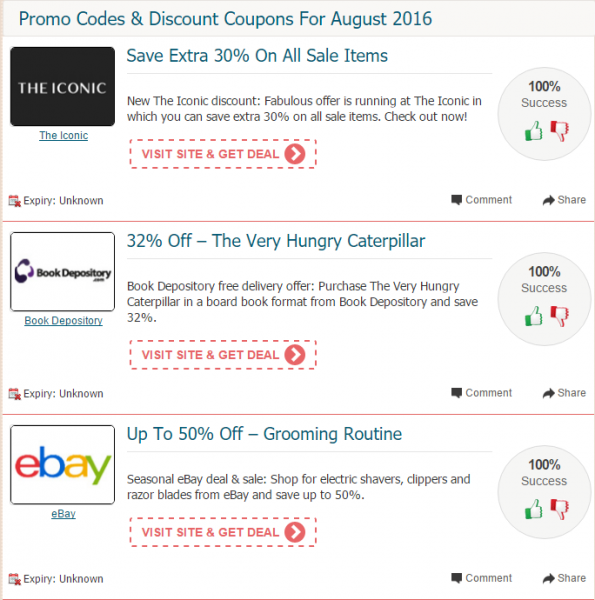 The world’s love of discount vouchers grew and in 1997, the United States announced it would celebrate National Coupon Month throughout September. Retailers issue discounts and offers throughout this month, both online and in physical stores. The September deals are much welcomed by shoppers in the break between summer and the holiday sales! Scientists have discovered that using discount deals actually makes people happier, and businesses know that coupons directly increase sales.

The Australian coupon market and how it is evolving

86% of shoppers actually plan their purchases around the offers and discounts they have, and over three quarters of the same group will select stores based on their discount deals. Grocery shopping is the most common area where discount codes are used. A survey found that 58% of customers will make a search for deals before they head out to the supermarket. Vouchers issued at the till for purchases have one of the highest redemption rates among coupon types. Shoppers are likely to use the same grocery store regularly, and often carry money off vouchers with them until the next visit.

Other key areas where vouchers are frequently used include:

Technology has been a key trend in voucher use. 82% of people prefer digital offers to printed coupons, finding them more practical and easier to use. In Australia, there are 15 million Facebook users and 2.8 million Twitter users. 65.5% of Australians are thought to use at least one form of social media network. Almost one third of these consumers follow their favourite brands’ pages and accounts: and they say they do this solely to get offers and discounts.

Because of the internet, shoppers are becoming very clever at finding bargains. Unless retailers monitor their profits closely and limit the number of discount vouchers issued, they could see all profit margins cut. One such example is American home ware store Bed Bath & Beyond, who saw a 10% drop in profits when its 20% discount deal became too widespread too quickly.

However, savvy retailers know how to keep the customers sweet with great deals, while bringing in full price sales on other products in their lines. 77% of surveyed customers said offers increase their positive perception of a brand and make them more loyal to that company overall. Having a time limit on coupons and offers increases urgency in customers and makes them more likely to buy right away. If they like the product, a repeat sale at full price is far more likely.

The future of coupon use

It seems likely that coupon use will continue, and that companies will keep issuing great deals for customers. The world’s largest vouchers site is now worth an estimated $33 million, and the industry as a whole is growing rapidly. Millions of Australians every day use their computers and smart phones to hunt for the best deals and discounts, and we can now all shares those offers with our friends through social media, and hear about offers from those networks as well. Studies show that smart phone use is on the rise, and that around 48% of Australians have a voucher site’s app on their device. Printed coupons are likely to decline even further, but digital voucher use will increase.