Home  »  Tech   »   Australian Companies do not have to pay compulsory Superannuation! Here’s how they get around it

First of all, let’s set the picture. In late 2013, I started a new job, working full time. In November 2015, the company went into Liquidation. The last time this company paid Superannuation was in June 2014. To summarise, an Australian company did not pay any employee superannuation for 17 months prior to the companies’ liquidation.

You are probably saying right about now, “why didn’t you leave and find another job if they haven’t paid you superannuation?” This is probably reasonable advice considering that it is an early warning sign your company is having financial difficulties. However, I liked my job, and it was never really about the money. The reason for this post is to spread awareness about Superannuation and the risks involved to those that are relying on this money soon for their retirement.

But here’s the thing with the current Superannuation Laws in Australia, if a company goes into Liquidation or Administration, they are no longer required to pay you your Superannuation. 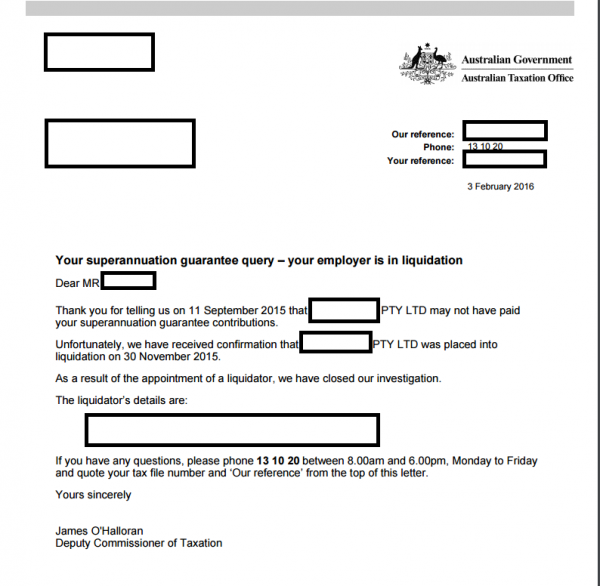 So what does this mean? Basically, I’ve lost 17 months of Superannuation entitlements.

One interesting thing that the ATO states is that Directors of companies are personally liable for unpaid superannuation.

If you are a company director and the company has outstanding PAYG withholding and SGC obligations, you will become personally liable for a penalty equal to these amounts.

The directors of a company that fail to meet a PAYG withholding or SGC liability in full by the due date each become personally liable for a penalty equal to the unpaid amount. These penalties are reduced by any amounts paid towards the original liability and are sometimes referred to as parallel liabilities.

Sounds good doesn’t it? If the company goes into Liquidation, and the Directors of the company is still liable, who keeps the money? Does it go back to the employees or does the ATO pocket it?

Further down on the page, unfortunately, it states:

What is a director penalty notice?

For unpaid amounts that were reported within three months of the due date:

For unpaid amounts that were not reported within three months of the due date:

Where a penalty is incurred, there are certain actions that can be taken by the company or its directors to cause the penalty to be remitted.

Where the company has reported its PAYG withholding and SGC obligations within three months of the due date, the director penalty will be remitted if you take one of the following actions any time before the 21st day after a DPN is issued to you via Australia Post:

To put it simply, and with my understanding, if the company appoints an Administrator and a Liquidator, they don’t have to pay Employee Superannuation Entitlements. But one thing isn’t clear as it states “reported within three months of the due date“. Does this mean the entire Superannuation is remitted, or only the last 3 months?

One would think it is only the last 3 months, because the previous PAYG and SGC were not meant and the company did not go into Administration or Liquidation. So why is the ATO saying that the unpaid Superannuation claim is now closed? A question still left unanswered.

Warning Signs a company is in financial trouble

Unpaid Superannuation is one of the first warning signs that a company is in trouble. Here is a list of signs that I saw within my company which made it head towards the doom. Again, why didn’t I leave? It was a good job.