The European Union has fined Google a record $3.62 billion Australian Dollars for breaching “antitrust rules” with its online shopping service.

However, I believe this is wrong (which I will explain shortly), but let’s first go into more detail about the fine. 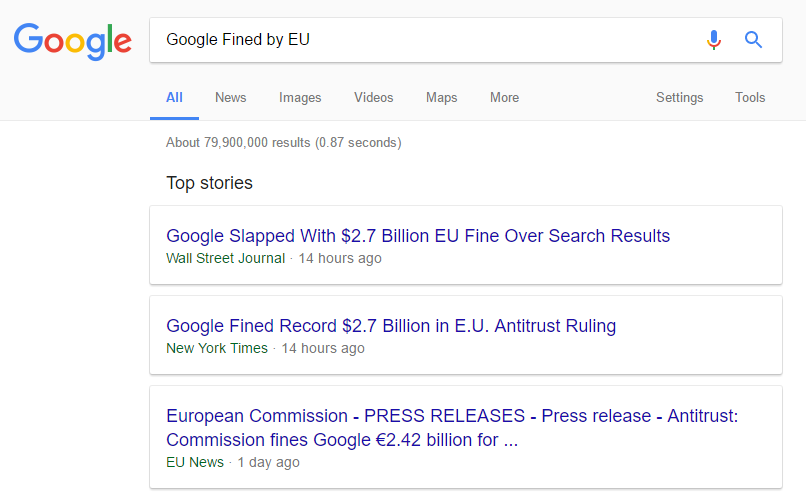 What Did Google Do to Be Fined by The European Union?

The European Union alleged that Google “systematically elevates its shopping service, even when other options might have better deals”. They say Google had “abused its market dominance as a search engine by giving an illegal advantage to another Google Product”. They continued and said, “it denied other companies the chance to compete on the merits and to innovate, and most importantly, it denied European consumers a genuine choice of services and the full benefits of innovation.”

Why This EU Fine Wrong

Google has essentially created a product that people want to use… A product that allows you to search for anything on the web. There are many Google competitors that people are free to use such as Bing. But most people like to use Google, because it’s a superior product (in my opinion).

If we look at how users are using Google in a physical-world way, Google is not the only company promoting their own products over its competitors. Let’s look at a physical shop for example. People walk into a shop (going to Google’s website), they look around the shelves (by entering a search query), find what they want (by looking at the search results) and then leave (by clicking on the website). People go to Google because they want its products!

The reason why Google got fined is because they were showing their products over their competitors.

But wait one second… Retail outlets and other businesses do this all the time. Why was Google fined for up-selling and cross-selling its own products when people are in their store? (analogy)

For example, a small retailer may sell handbags in a retail outlet that they manufacturer. Because they don’t have a diverse range of products, they on-sell a range of other brands’ handbags to get customers through the door and to provide them with more choice. To maximise the profit of the company, it makes sense for the store to promote their own product because it has a higher profit margin rather than selling the other brands of handbag. Therefore, the store promotes their own brand handbags over the other brands by placing it at the front counter and in main display areas.

This is exactly what Google has been doing.

So why was google fined for showing their own products to customers that visit their website (visit their physical store)? That’s business.

Supermarkets do it all the time – they promote their own-brand products over branded products. Are they too being anti-competitive?