It has been a big week here at Jack Cola HQ, with the launch of a brand new website after moving from Joomla to WordPress. Not only this, I am proud to launch Jack Cola Freebies, where I will be giving away free stuff.

With the launch of Jack Cola’s Freebies and the new website, I’ll be giving away a Samsung Galaxy S4 worth more than $700 to one lucky person, as well as other cool prizes. 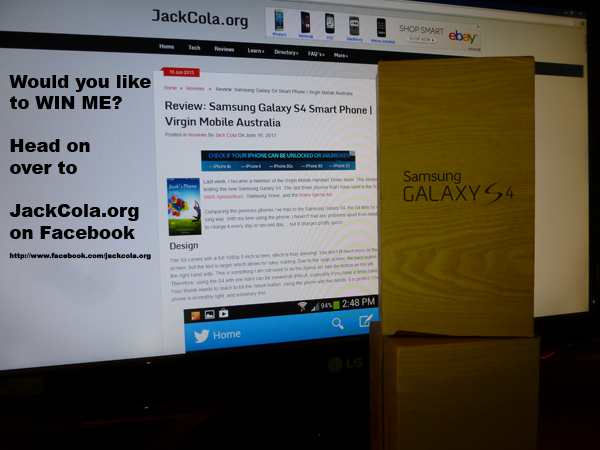 I would like to thank both Virgin Mobile for inviting me to their Mobile Handset Testing team and providing a GS4 to review, and Vodafone for allowing me to give their test unit to you after inviting me to test out their new 4G network, in which you can surf the internet at some awesomely fast speeds.

How To Win A Samsung Galaxy S4

To win the Samsung Galaxy S4, you must participate in Jack Cola’s Freebies on Facebook in where you can win a lot of other freebies, not just the S4.

Winning the Samsung Galaxy S4 is easy. Just head on over to Jack Cola’s Freebies on Facebook and walk though the steps.

To vote, just click the above link, and select who you think deserves the Galaxy S4 and accessory pack. Voting closes on the 18th July at 5pm, so plenty of time for the winners to get their friends and family to vote for them.

And The Winner Is…

Please congratulate Ash M for winning the Samsung Galaxy S4 and Accessory pack! An email has been sent to you so I can send you the prize! I would also like to thank everyone who participated in this giveaway, both entering, and voting for the winner.