Australia’s largest broadband and telecommunication forum has just released this year’s results of the Australian Broadband Survey. The survey covers key topics such as the NBN, the broadband marketplace, wireless internet, how broadband is being used, signing up to broadband, payment, customer support, service reliability, broadband features, broadband hardware, why customers stay with their ISP, and why customers leave their ISP.

With these results, please remember that there may be bias towards the results as the majority of participants are generally more tech savvy than those who did not complete it.

I am strongly passionate towards the NBN, but I hear so many stories from people saying that is a waste of money. But analysing these results, the majority of people think the NBN is a great achievement for Australia, and would be happy to adopt with the new technology. However, 35% of respondents wouldn’t pay any more than they already do to be connected to the NBN.

In the last 12 months, 61% of respondents think that the value of their broadband service as improved, 23% think it’s about the same, and 7% think it’s gotten worse.

Along side the NBN, there has also been discussion that a ‘wireless’ option is a better and cheaper alternative compared to spending billions of dollars on the NBN. Amazingly 68% of people don’t think wireless broadband is a serious option for home internet access.

How Broadband Is Being Used 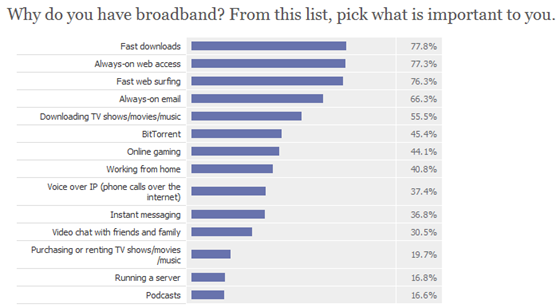 As for the ‘broadband budget’ of home users, the majority of people don’t have a problem with paying internet fees, and 50% of users use between 50% and 100% of their allowable monthly quota.

Signing up To Broadband

When users are signing up to broadband, Exetel has the worst reputation with regards to ISP’s terms of service with 53% disliking the fact that the ISP can change conditions anytime, and 60% saying that they Exetel do change the conditions frequently, and this has increased dramatically since last year for Exetel users.

It is no surprise that users used Whirlpool to research their decision to choose an ISP. In terms of installation difficulties, TPG had the most issues and blamed Telstra for most of them.

In terms of payment, most users pay by credit and debit cards, followed by direct debit and B-Pay, with the majority prefer to pay their internet bills using those methods.

The main customer support method is through telephone, with users waiting around 1-4 minutes to speak with a representative. TPG had 25% of respondents saying they failed to reach anyone at all when they called.

The main feature of broadband is essentially “do you have a static IP address, or do you  need one?” The majority of users answered that they don’t.

The most common brand of modem people are using is Billion with 24%, followed by Netgear with 13% and Netcomm with 9%.

Why Customers Stay With Their ISP?

The main factors why customers stay with their ISP are due to reliability, pricing, followed by performance. The main factors of what they don’t like about their ISP is due to metered uploads, pricing, and customer service which Telstra, and Optus have strong responses too.

For Telstra NextG customers, 80% of users say the service is too expensive of what it’s worth.

Why Customers Leave Their ISP?

It is not surprise that Telstra is still the clear winner in terms of customers leaving the ISP due to prices being too high, and download limits too low; however, it has improved since the previous year’s results.

For more information about the statistics and the results, visit the 2010 Whirlpool Annual Australian Broadband Survey Results page. If you want to know more about broadband in Australia, please read A Brief Summary Into Australia’s Telecommunication Industry – Network, Prices, Companies, NBN.

What do you think of the results? Do you agree? What are you thoughts about broadband in Australia? Please share your comments below.